The Complete Guide to Rust Prevention

There’s a reason people use iron for tools, machines, and buildings — iron is abundant, strong, and an essential part of nurturing life on earth. However, as powerful as this metal is, it can be destroyed by the simple combination of oxygen and moisture. Yep, rust.

What is rust and how is it caused?

We’ve all experienced rust, whether it’s on a squeaky gate, a broken bike chain, or dulled tractor implements. But even though you’re familiar with it, you may not know how it happens.

By definition, rust is an oxide that occurs when iron (or an alloy containing iron) is exposed to water and oxygen for a long period of time. When water combines with the iron at an atomic level, that oxidation weakens the bond of the metal itself. Over time, oxidation causes iron to lose its strength.

To put it into perspective, think of a stiff drink — let’s call it a Steel Slinger — and what happens when it sits for awhile. Condensation on your glass happens, your ice melts, and what was once perfectly mixed is now diluted. Not so powerful, right? Iron atoms broken down by water exposure aren’t so different, and just like that “cocktail”, your iron is not as strong as it once was. When your iron isn’t strong, it’s susceptible to more water damage and rust, and will eventually break.

So does this happen to every metal that gets exposed to the elements? Not exactly, because technically only iron rusts. We know, you may be thinking: “But everybody’s seen rusty copper pennies, and silver jewelry definitely looks rusty when it’s left in the water.” That’s because of metals like copper, aluminum, silver, and even gold experience corrosion. Corrosion is the result of a chemical reaction to an oxidant, and rust is a specific type of corrosion caused by water and oxidation.

So, what’s the biggest difference between a green patina on a penny and rust on creaky iron chains? The patina on a penny is tarnished, meaning it doesn’t penetrate the materials below the surface. Tarnish only affects the top layers of metal, and actually works as a seal to protect the deeper layers from oxygen that leads to more damage. More severe corrosion like rust, on the other hand, can break down machines as powerful as bulldozers. And once rust happens, there is nothing that can restore the metal to its former glory. That’s where rust protection comes in handy. But first, let’s look at some iron facts and statistics. 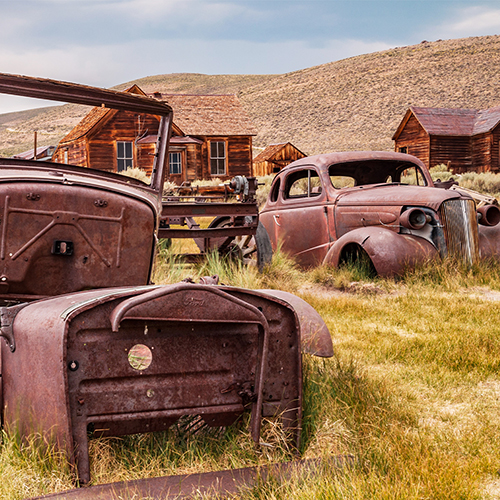 How much damage does corrosion like rust really cause? Just review these 8 surprising facts.

What are the types of rust?

All rust is not created equal. Each type of rust is unique, with different causes and different results, but each type of rust can be broken down into three main factors: process, packaging, and environment. Here’s what they mean:

Putting iron through different processes is one of the major causes of corrosion. It could be the cleaning process, or it could be a fabrication process like cold working, heat treating, machining, or handling. Protecting iron in this stage is crucial — and many manufacturers consider rust prevention at this stage.

Packaging metal can be a dangerous game. If you package iron in acidic materials like non-treated paper, you can inadvertently trap moisture, and this can result in rust.

It’s no surprise that the environment poses a major risk to iron. Rain, humidity, and temperature can all cause rust. For industries that primarily work outside — such as marine, construction, and agriculture businesses — rust protection at this stage is a major concern.

Now that you know about the stages where rust can happen, here’s something new to consider: Different types of rust manifest as different colors of rust. Here’s what you need to know about the differences in rust based on color.

Red rust is caused by the combination of moisture and a contaminant like salt, which is why it so often occurs near faucets, docks, tractors, cars, and ships. When you experience red rust, you’ll also notice uniform corrosion.

You’ll most often see yellow rust in recessed areas of metal equipment. This solvated rust appears to run and drip, caused by puddles of water.

Drier than red and yellow rust, brown rust is caused by high oxygen and low moisture in the atmosphere. It can also be caused by contamination during the manufacturing stage. Brown rust is usually non-uniform, appearing in just some areas of the surface.

Caused by oxidation in low moisture, black rust appears in a thin film almost like a stain. Areas susceptible to black rust are usually covered, so limited oxygen reaches the surface.

In some cases, you may experience multiple colors of rust in a single area. This is especially common for areas with high moisture and on equipment or other metal items covered in wet paper. However, there aren’t just rust types to consider — there are also a few corrosion types that are commonly found. Here’s how to spot it:

Filiform corrosion is a common form of corrosion that is caused by moisture, or a corrosive solution, getting under a defective coating. Also known as underfilm corrosion or filamentary corrosion, filiform looks threads crisscrossing over a surface and frequently occurs on surfaces including coated steel, magnesium, and aluminum covered with materials such as tin, silver, enamel, or lacquer, to name a few.

Galvanic corrosion is what happens when two metals of different potential come into direct contact and exchange electrons like a battery, resulting in the weaker metal corroding. Also known as dissimilar metal corrosion, the corrosion increases with the increased difference in metal materials. Simply put, the greater the difference in the potential of two metals, the greater the corrosion.

While rust causes integral changes to iron and the iron can never be restored to its original strength, it is possible to remove some kinds of rust with household items. Here are a few quick recipes to help you remove minimal rust from metal tools and equipment:

Simply sprinkle salt and squeeze a lemon or lime over the rusted area. Wait a few hours, then use the rind to scrub the rust clean.

Vinegar is a powerful, natural cleaner. To target rust on smaller objects such as iron nails or farming tools, soak rusty parts in vinegar overnight and rinse clean.

If you have potatoes nearby, simply cut one in half and use it like a sponge. Add a cleaning agent like baking soda or dish soap to the potato and you can scrub rust away.

Did you know that molasses has a naturally-occurring chemical compound called chelating agents that can remove corrosion? To remove rust, mix ten parts water with one part molasses, then wipe clean.

Pour hydrogen peroxide over rust and let it sit for a few minutes. For best results mix with sodium borate, or borax as its commonly known.

Though not made from common ingredients like the other recipes, Nyalic’s Tuff Prep™ is a mild abrasive gel designed specifically to deep clean mildly-oxidized painted surfaces, oxidized fiberglass, and oxidized bare metal. Just apply to untreated metal surfaces for a biodegradable, environmentally-friendly product that cleans away rust as well as black streaks.

What you need to know about rust prevention

The best way to avoid dull blades and damaged equipment is to protect iron BEFORE it has a chance to rust. This can be achieved by using rust-resistant alloys, taking extra precautions during the design stage, galvanization, bluing, coating, and maintenance.

The planning stage is the best time to steer clear of rust from forming on metal items like equipment or building materials. During the design stage, be sure to minimize water penetration through cracks and crevices. Any joints should be welded rather than bolted and you may want to consider draining holes to best avoid rust.

Galvanization is coating the surface of iron with metallic zinc to prevent corrosive substances from penetrating the metal. By galvanizing the metal, you can be sure oxidation is transferred to a protective zinc layer.

The corrosion resistance technique bluing gets its name from the blue-black appearance of the resulting finish. Best used on firearms, clocks, and other metal work, bluing is completed by soaking parts in a potassium nitrate, sodium hydroxide, and water mixture.

Coating is one of the most common types of rust protection, and there are a couple of options to get the job done. Organic coatings, including things like oil and paint, create a barrier against corrosive elements and therefore provide rust prevention. For powder coatings, a material like acrylic, polyester, nylon, or vinyl is applied to a clean surface, heated, and turned into a thin film. Usually applied by spraying the mixture, powder coatings cling to the surface and then are usually placed in a hot oven to fuse particles of a continuous film between 25 and 125 micrometers.

Nyalic specializes in a top-of-the-line clear coating. This coating is not a wax, paraffin, polish or any other type of sacrificial coating. It is a rust protection and rust preventative that works on machinery, vehicles, boats and more — but more on this later. 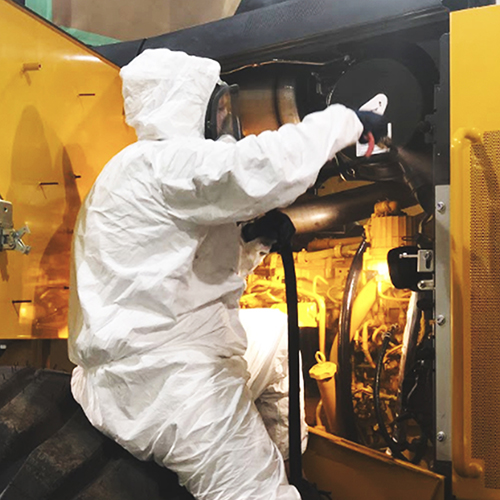 Whether you work with farming equipment, firearms, or household supplies, regular maintenance is a must if you want to keep rust away for good. As you notice rust forming on metal, use a razor blade and warm, soapy water to remove grime. It’s also important to apply a resistant coating to the surface.

There are many ways to prevent and manage rust, but there’s no stronger defense than products from Nyalic’s arsenal. Nyalic offers rust degreasers, neutralizing cleansers, and oxidation removers. However, Nyalic’s most popular product is the Nyalic Clear Coat Protection.

Nyalic Clear Coat Protection is a water-clear, flexible, hard-coat resin that works as a permanent protection against water, salt, dirt, urine, and corrosive chemicals that lead to rust. When applied properly it won’t yellow, crack, peel, or flake — it will form a seal that inhibits paint oxidation, metal corrosion, pitting, and staining.

So, how strong is Nyalic exactly? Well, it was created for outer space — literally. Designed specifically for the Apollo space capsule, we anticipated intense cold, ultraviolet radiation, and corrosion from a saltwater splashdown when building this product. As a result, we developed alloys and coatings strong enough to withstand extremes never before experienced on Earth. Because of this commitment to protection, Nyalic was selected from over 300 options for its superior durability, flexibility, and ability to withstand UV rays.

Today, Nyalic is used for commercial and industrial equipment, electrical systems, structural supplies, building surfaces, and cooling systems. It is proven to work on a wide range of surfaces, including anodized metals, galvanized metals, chromed metals, painted surfaces, various finishes, fiberglass, plastic, electrical connections, and mechanical connections. It can even be used on sneakers to protect that “just out of the box” condition for many wear-and-tear experiences to come.

Ready to prevent rust once and for all?

Preventing rust and corrosion can leave a huge impact on a business’s finances. With the help of Nyalic, you can extend the lifespan of equipment, preserve the residual value of leased equipment, maximize resale value, reduce maintenance costs, minimize machine downtime, lost production, and lost labor hours.

See how Nyalic can help you protect everything from engines to wiring harnesses to tractors. To learn more about Nyalic, purchase a DIY kit, or to schedule an application, please email sales@nyalic.com or call 770-690-1480. 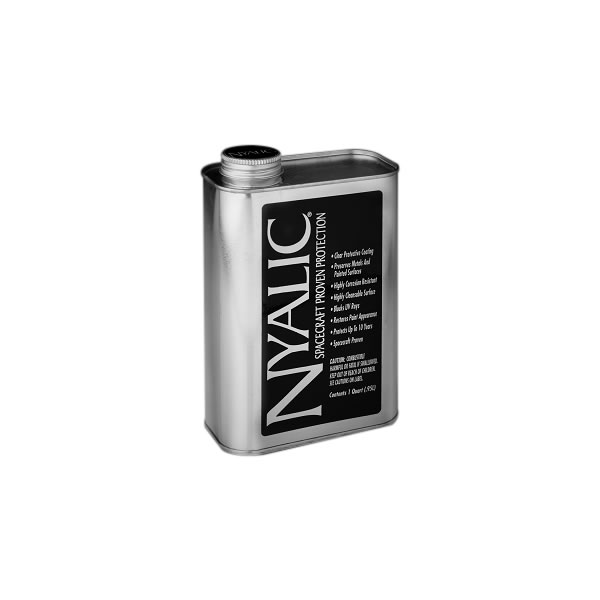 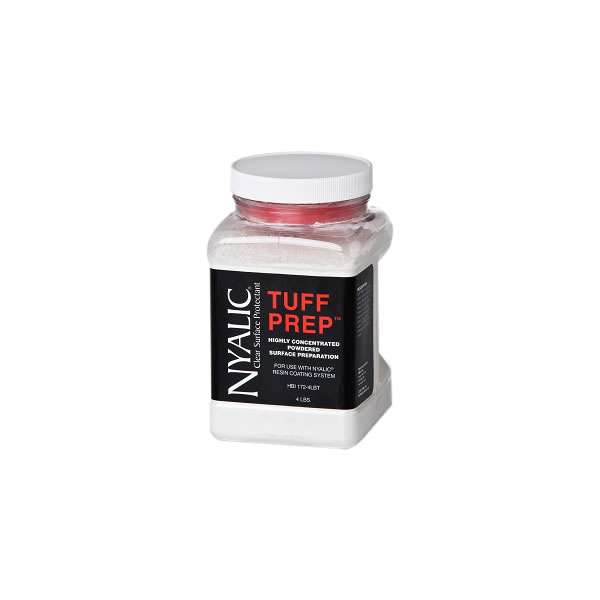