Nyalic: The Best Kept Secret of the Apollo 11 Landing 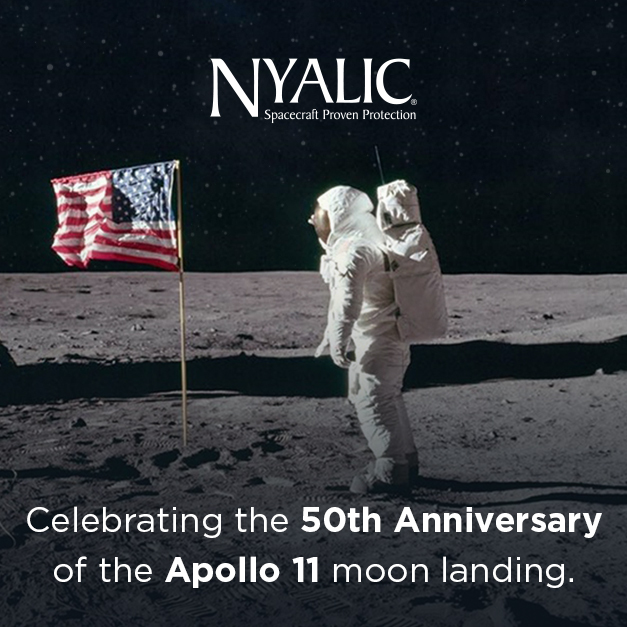 “That’s one small step for man, one giant leap for mankind.”

Those infamous words, uttered half a century ago by astronaut Neil Armstrong upon stepping foot on the moon, are still remembered and revered – especially today, the 50th anniversary of Apollo 11.

On July 16, 1969, Armstrong, along with fellow astronauts Buzz Aldrin and Michael Collins, blasted off at NASA’s Kennedy Space Center in Florida on a journey to the moon. Four days later, while Collins helmed the command module, Armstrong and Aldrin landed Apollo 11’s lunar module, Eagle, on the moon, making history as the first humans to set food its surface.

In honor of this historic event’s 50th anniversary, here’s a little secret about the Apollo 11 landing: Nyalic was there. Our high-performance, hard-coat resin was developed to specifically protect the interior of the spacecraft from the extreme conditions of outer space. Not only did we make it to the moon, we beat out 300 other formulas for the opportunity to do so.

How Nyalic Became a Piece of American History

In the sixties, America’s race to the moon created an intense demand for technological advancement in alloys and coatings because of the harsh conditions of space travel. From the intense cold and ultraviolet radiation to the heat of re-entry and the expected corrosion caused after a saltwater splashdown, these vehicles had to withstand extremes never before experienced on earth.

“The coating needed to be lightweight as the weight maximum on a spacecraft is limited,” explains Skip Hawkins, CEO of Nyalic. “The coating also needed to be clear so they could see beneath it, protect against corrosion, and something that could withstand significant temperature changes.”

During development of the Apollo space capsule, North American Rockwell solicited chemical companies and independent chemists to create a protective coating for the spacecraft. Rockwell subjected over 300 different coatings to a battery of tests to determine which one would best meet its performance parameters. Nyalic came out on top.

Nyalic’s unique formulation using a blend of several polymeric resins fulfilled the properties Rockwell was seeking: a coating that was very durable yet flexible, withstood UV rays, prevented corrosion and oxidation, and performed at a film thickness as low as five microns. After intense and careful evaluation, Nyalic was chosen and used not only on the Apollo command module but on the Lunar Rover as well. “Nyalic helped put a man on the moon,” says Hawkins, “and that’s pretty significant.”

Today, Nyalic endures and is now used to protect equipment from corrosion in a variety of settings – from agriculture and construction to transportation, marine and industrial settings. Learn more about how Nyalic can work for you here.